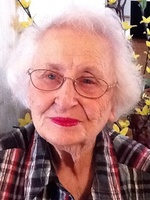 Garden City- Roberta Mae Renick, 98, died on Sunday, January 10, 2021 at The Ranch House in Garden City. She was born on July 27, 1922 twelve miles north of Holcomb in Finney County the Daughter of Floyd Elmer & Vera Leah (Knoll) Ackley. She married William “Merrill” Renick on Easter Sunday, April 13, 1941 at the Presbyterian Church in Dodge City, Kansas. They made their home in Garden City where Merrill owned and worked as a Pharmacist in the family drug store, Renick Drug Store No. 1.

Roberta attended Holcomb schools thru the 9th grade, then transferred to Garden City High School, until her senior year when the family moved to Stockton, Kansas where she graduated. She loved life, never met a stranger, was a basketball fan, an avid bridge player, enjoyed cooking, china painting, crocheting and traveling the country with her husband in their motor home. She kept up to date on current events until the day of her death. However her greatest enjoyment was spending time with her family and dear friends. She attended the Community Congregational Church for over 60 years.

She is survived by her 3 Daughters- Sandra (Don) Stark of Centennial, Colorado, Merri Conley of Garden City and Julie (Steve) Leonard of Omaha, Nebraska, 5 Grandchildren and 8 Great-Grandchildren. She was preceded in death by her Parents, Sister- Henrietta Tompkin and Husband. He died on September 17, 2015. They celebrated 74 years of marriage.

There will be a family graveside in Valley View Cemetery in Garden City where Roberta will be buried beside her Husband Merrill. Friends may call from Noon to 8:00 PM Thursday at Garnand Funeral Home. Memorials are suggested to Cystic Fibrosis Foundation in care of Garnand Funeral Home. Condolences may be posted at www.garnandfuneralhomes.com

All rights reserved. This obituary is also archived at obittree.com