To share your memory on the wall of Melvin Neufeld, sign in using one of the following options:

In 1984, Melvin was first elected to serve the 115th District as a State Representative. He continued to serve until 2010. During this tenure, he served as Chairman of the House Appropriation Committee and the Joint Committee on Rules and Regulations and was elected Speaker of the House in 2007. He was elected President of the National Conference of State Legislators and served on numerous NCSL taskforces including Welfare Reform, Healthcare, and Military and Veterans’ Affairs. He was one of 9 Legislators from across the country who served on the Legislative Working Group, a partnership of the National Conference of State Legislatures and the National Scientific Council on the Developing Child. He served on the Steering Committee of the National Academy of State Health Policy, the National Scientific Council on Brain Science, and the Center on the Developing Child at Harvard. In 2011, Melvin was appointed by Governor Sam Brownback as the Chairman of the Kansas Human Rights Commission and continued in this position until his death. Melvin was well known for his “Melvin’s Rules”, a list of 10 rules for both political and everyday life.

Melvin is survived by his wife, Maxine of the home and daughter, Sharla and Jeff Smith of Ingalls. Also surviving are his grandchildren, Shandon and Heidi Smith, Shayna and Dane Conant, Jenessa Smith all of Cimarron, Kayla Neufeld of Coralville, Iowa, and Kenzi and Tristan Comer of Lee’s Summit, Missouri. He was lovingly called “Big Gigi” by his great grandchildren, Konner, Audi, and Camden Smith, and Raelyn, Daxton, and Rigstin Conant, and Dasia, James, and Juliana Fash. He is survived by his sisters, Joyce and Vaughn Prather, Beloit, Karen and Elgie Friesen, Wellington, Colorado, and brother, JD and Sylvia Neufeld of Sands Springs, Oklahoma. Also surviving are his House Daughter, Kavita Akula, of Bhilai, India (Garden City), daughter-in-law Dana and Brad Pryor of Lee’s Summit, Missouri, and numerous nephews, nieces, cousins, and friends.

Melvin loved building model trains, tracks, and scenic displays since he was a boy. His collection of Series O trains has taken up several rooms in his homes over the years and was very popular with his kids, grandkids, great grandkids, and many other children of all ages.

Services for Melvin will be held at Turning Point Church of the Nazarene in Garden City on Saturday, August 8th, at 10:30 a.m. with Pastor Jim Bond, Kansas District Superintendent officiating. Friends may visit with the family on Friday evening at Garnand Funeral Home from 6:00 p.m. to 8:00 p.m. In lieu of flowers, memorials are suggested to Turning Point Church of the Nazarene Bus Barn Project or St Catherine Hospice in Garden City both in care of Garnand Funeral Home of Garden City.
Read Less

Receive notifications about information and event scheduling for Melvin

You will receive any future notification messages.

Provide comfort for the family with a meaningful gesture of sympathy.

We encourage you to share your most beloved memories of Melvin here, so that the family and other loved ones can always see it. You can upload cherished photographs, or share your favorite stories, and can even comment on those shared by others.

Posted Aug 05, 2020 at 01:31pm
We are sorry to hear about the death of Melvin. We have so many fond memories of him as a friend in the community, but also as a state representative who always stood for the Christian values that made our community strong. I can remember the strong support he gave to the school at Ingalls while I was a teacher there. My husband sold him seed for his farm and then later to Jeff and Sharla. May God Bless you, Maxine, Jeff and Sharla, and the rest of the family. Psalm 16:9-11. Verlin and Rose Wedel
Comment Share
Share via:
KW

Posted Aug 04, 2020 at 06:13pm
Melvin was so kind to me after the death of my husband, Rocky Fund, a state representative who served when Melvin was Speaker. I worked with Melvin when he was a Trustee for Garden City Community College. He always had a way of telling a story that had many teaching moments for those who listened. I enjoyed our visits.
I am so sorry for your loss. May your faith and good memories comfort you. I will truly miss him.
Linda Fund
Comment Share
Share via:

Posted Aug 04, 2020 at 06:11pm
My friendship with Melvin (and Maxine) has been very special down through the years. My heartfelt sympathy goes to Maxine and all the family. "Precious in the sight of the Lord is the death of his saints." Psalm 116:15.
Sandra Sime Petrov
Comment Share
Share via:
KH

Posted Aug 04, 2020 at 02:43pm
So sad to hear of Melvin's death. He was always a joy to visit with at anytime we would see him either at a reunion, parade, store or anywhere. He always was a very pleasant and a grin. Never missed shaking your hand. He will be missed a lot and I know there is lots of memories to cherish. Our sympathy to Maxine and family. Keith & Jeanie Hall, Ulysses, Ks.
Comment Share
Share via: 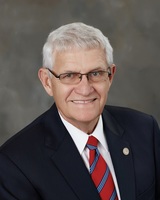