To share your memory on the wall of Iris Murray, sign in using one of the following options:

Iris grew up and graduated high school in Greensburg. She and her husband moved to Finney County in 1961. She was the Manager of the Elk’s Lodge for 8 years and held various other jobs but her favorite was working as a housekeeper for 20 years. She was a member of First Southern Baptist Church, charter member of the Finney County Genealogy Society, past 4-H Leader and Daughters of American Revolution.

Receive notifications about information and event scheduling for Iris

You will receive any future notification messages.
No funeral details available.

We encourage you to share your most beloved memories of Iris here, so that the family and other loved ones can always see it. You can upload cherished photographs, or share your favorite stories, and can even comment on those shared by others. 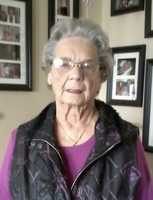