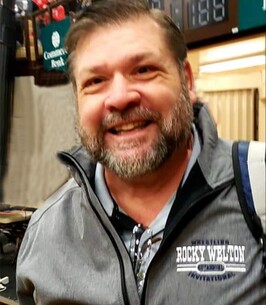 Beloved husband, father, and family man Charles K. “Chuck” Reinert passed peacefully on July 1, 2022. Chuck’s life is the ‘Vision Quest’ of a man who loved his family, his community, his nation, the Denver Broncos, the sport of wrestling, and his Lord and Savior Jesus Christ.

Chuck was born in Pueblo, CO on May 13, 1959 to Jim and Terri Reinert. Weighing in at more than 11 pounds, Chuck was a heavyweight at birth. He began setting records at an early age as the largest baby born in Pueblo, a title he held for many years. His childhood was filled with birthdays, holidays, and Sunday dinners that always included a slideshow at Grandma and Grandpa Reinert's house. This also holds true for gatherings with the Cox and Younger families, where Chuck could not get enough of the wild west stories of his outlaw relatives, the Younger Brothers, and their adventures with Jesse James.

Chuck’s love for sports became his passion, which led him to excel in several sports including football, basketball (yes, basketball!), and track. He later became an accomplished wrestler. Chuck could play any sport and do it well when he put his mind to it. Some of Chuck’s other hobbies included camping in Creede, riding motorcycles, and antagonizing his three younger siblings!

Whatever Chuck did, he did it big. He had a big appetite with a love for good food and big portions. The bigger the better, and that is how he lived his teenage years. BIG! Chuck’s family thinks he might have invented the phrase ‘go big or go home’

He attended both Cousino High School in Warren, MI and South High School in Pueblo where he graduated in 1977. Chuck was a standout athlete, earning state honor recognition in both football and wrestling; named to the 1976 2nd Team All State Colorado Football Team, playing in the 1976 Inaugural Cannon Game between South and East, winning the Cannon for South; and taking 3rd place in the Heavyweight division at the 1977 Colorado AAA State Wrestling Tournament are just some of his athletic accolades. Chuck was recruited to play football and attended Garden City Community College (GCCC) starting in 1977, helping the team earn conference championships in 1978-1979.

On the western plains of Kansas, he found his sunshine and the love of his life, Catherine. Who would have ever imagined Big Old Tough Chuck, taking a knee and tapping out when a twinkle from Catherine captured his heart. Chuck and Catherine were married in Garden City on June 7, 1982 and started a family.

Over the years, Chuck worked for the Kansas Department of Transportation, Garden City and Lakin Recreation Commissions, and most notably Garden City Community College. There he served as the Williams Stadium Superintendent, taking great pride in the quality of the facilities and overall experience of the ballpark for athletes, umpires, and spectators. While at GCCC he had the honor of serving on the coaching staff when the Broncbusters attended the 1999 NJCAA World Series. After his retirement, Chuck found a new hobby in radio broadcasting, as the color commentator for Holcomb High School athletics. For decades, he also dressed as the most authentic Santa ever seen, bringing joy to kids at Christmas while spreading the word of the Lord, with the story of how the candy cane represents Jesus Christ.

Chuck Reinert is a household name in Southwest Kansas, known for his four decades of officiating high school sports, where he is infamous throughout the State of Kansas as a wrestling official. Chuck’s grit and determination drove him to achieve distinction, being awarded the 2018 Eldon Zimbleman Kansas Wrestling Officials Association Award of Excellence, the 2007 National Federation of High Schools Officials, Kansas Wrestling Official of the Year, and the 2002-2003 and 1993-1994 Kansas Wrestling Coaches Association Official of the Year. Ask Chuck anything about wrestling and then be prepared for a 2-hour dissertation of every wrestling match he’d ever officiated. He is the epitome of the American Wrestler, knowing victory is only achieved through hard work, sweat, blood, and sacrifice. Chuck made us all champions of will, drama, and heart. He dedicated his short time on this earth to the service of the citizens of Kansas, to be champions of our own destiny.

Many will remember Chuck as the greatest storyteller of all time. When Chuck’s eyebrows raised and his eyes opened wide, his accounts of glory days were abound. He could make people laugh and cry at the same time. How about those stories of growing up in Colorado, the UFO sightings in the Rockies, the Mafia, and the list goes on. And lest not forget his text and Facebook posts full of anecdotal wisdom, always ending with PRAYN4U! Don’t get him started about the athletic achievements of his nephews Cameron Craig and Hunter Reinert. Chuck was the family’s ESPN.

Chuck will also be remembered for his abilities to shake and bake a Kansas hoedown with delicious BBQ, imported Italian sausage from Pueblo, green chile, and treats of all sorts. Tents, tables, and chairs would appear from nowhere and the fiddle playing would start. Chuck loved to prepare his food for others, and it's widely known that Chuck liked his food so much, taking thirds was commonplace. Anyone who had breakfast at Hannah’s knew to pass the leftovers to Chuck. He’s the man.

The family is ever endeared to Chuck for helping Cathering care for his inlaws Avril and Virgil Criag. He was a good son. And of course marrying a Craig girl meant joining the secret society of the Craig Brother-in-Law-Hood. The brothers bid farewell with love and respect, praying for Chuck and his heavenly reunion with his parents and inlaws.
In Chuck’s memory, it would be remiss not to remember his love of the Lord. The two things that changed the trajectory of Chuck’s life were marrying Catherine in 1982 and dedicating his life to Jesus Christ in 1990. Following Catherine to a little white church, Chuck met Pastor Kent Crockett, and made the most important decision of his life, when he began his walk with the Lord.
Now Chuck, no stranger to adversity, fought the ultimate battle with cancer. Diagnosed 11 years ago with malignant melanoma, he won the first period. Score 1-0. The second period ended in a draw, with 10 years of continual examinations and removal of suspicious growths. Score still 1-0. And finally in the third period, his adversary threw in an incapacitating sucker punch, taking down the Gentle Giant. Although the match ended with the opponent pinning him, through personal courage and example, Chuck fought with all he had until the final whistle. He demonstrated how to live and die in those short brief moments, and gave a renewed hope to all to overcome individual adversities.

Everyone will miss Chuck’s endearing smile, hearty laugh, bear hugs, and unconditional love of his family and friends. For 63 years, Chuck served with honor and glory up until the very last second, refusing to go down without a fight. Chuck was loved, but his work on Earth was done. There will never be another Chuck Reinert. His never ending story of courage will be told to the world for generations to come. Rest easy Chuck.

A celebration of Chuck’s life will be held at 4:00 pm on July 9, 2022 at Holcomb High School Gymnasium, 600 N Jones Ave in Holcomb, KS. In true sports fan fashion, Chuck’s family requests the following athletic attire for those attending the celebration: Those who officiated with Chuck should wear their sport’s uniform and whistle; others are encouraged to wear their team gear or school colors, anyone is welcome to wear Chuck’s favorite Denver Bronco orange and blue, or their second favorite team’s apparel. Let’s fill the gym in a final celebration for Chuck.
The service will also be live streamed on Garnand Funeral Home’s Facebook page. Condolences may be posted at www.garnandfuneralhomes.com. In lieu of flowers, the family requests donations to the Chuck Reinert Memorial Fund, for his grandchildren’s education, in care of Garnand Funeral Home, 412 N 7th Street, Garden City, KS 67846. A private family burial will take place at a later date.

All rights reserved. This obituary is also archived at obittree.com